The Independent State of Papua New Guinea is the conventional long form name and is often abbreviated PNG.  PNG makes up the eastern half of the island of New Guinea, which is slightly larger than California.  The country has a variety of terrain, being largely mountainous, with Mount Wilhelm rising to 14,790 feet, as well as having extensive coastal lowlands. There are approximately 7.7 million people living in PNG with over 800 living languages. Currently, more than 450 are waiting for scripture to be translated into their language.

Climate: The climate is tropical. It is hot all year with most rain occurring during the monsoon season from December to April, when winds blow from the north-east. Winds blow from south-west during the dry season. The average rainfall is 70 inches annually with daily temperatures ranging from 60 to 81 degrees.

The flag of Papua New Guinea

Politics: Since independence, the government has worked to develop mineral reserves. One of the most valuable reserves was a copper mine at Panguna on Bougainville. Conflict developed when the people of Bougainville demanded a larger share in mining profits. Following an insurrection, the Bougainville Revolutionary Army proclaimed independence in 1990. Bougainville’s secession was not recognized internationally. In 1992 and 1996, Papua New Guinea launched offensives against the rebels. The use of highly paid mercenaries created unrest in the army. In 1997, troops and civilians surrounded Parliament, forcing the resignation of Prime Minister Sir Julius Chan. He was succeeded by Bill Skate. In 1998, a cease-fire was declared on Bougainville.

Natural Hazards: Papua New Guinea is host to several types of natural disasters depending on location on the island: earthquakes, flooding, tsunamis, tropical cyclones, and volcanic eruptions.  PNG sits along a volatile seismic strip called the “Ring of Fire” in the Pacific. 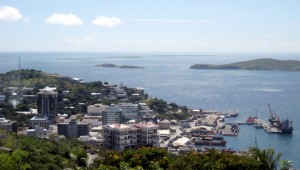 Economy: The World Bank classifies Papua New Guinea as a “lower-middle-income” developing country. Agriculture employs 75% of the workforce, many at subsistence level. Minerals, notably copper and gold, are the most valuable exports. Papua New Guinea is the world’s ninth largest producer of gold.

Port Moresby: Port Moresby is the capital of Papua New Guinea and is located on the southeast coast of New Guinea. It was built around Fairfax Harbor, the island’s largest harbor. Settled by the British in 1880s and named after British explorer John Moresby, its sheltered harbor was the site of an important Allied base in World War II. In recent years it has experienced problems with a growing disparity in income which has lead to an increase in crime. Exports include gold, copper, and rubber.

Information was retrieved from the Wycliffe Global Alliance and CIA World Factbook websites.